Winterstettenstadt/Southern Germany. The project "Drilling Overdeepened Alpine Valleys (DOVE)", part of the "International Continental Scientific Drilling Program" (ICDP), aims to reconstruct the spatial and temporal climate development during the ice ages up to 2.6 million years ago and show their influence on the landscape development in the entire Alpine region. To this end, the Leibniz Institute for Applied Geophysics (LIAG), in cooperation with the Albert Ludwig University of Freiburg and the State Office for Geology, Raw Materials and Mining in the Freiburg Regional Council (LGRB), carried out three research boreholes in the German Alpine foothills near Winterstettenstadt, southern Germany. With the completion, the first findings are already opening up. 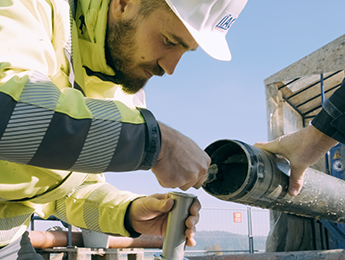 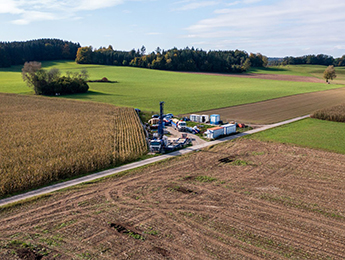 Research drillings should give information about the climate at that time. (© Merlin Kamke / LIAG) 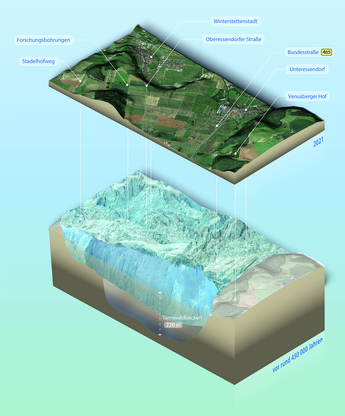 The region near Winterstettenstadt - today and about 450,000 years ago. (© Anne Pogoda / LIAG)

A total of about 700 kilograms of flushed sediments and about 165 metres of cores were extracted from the so-called Tannwald Basin, about 70 kilometres north of Lake Constance. Together with the geophysical measurements of the LIAG, they will, above all, generate more understanding of the climatic characteristics of the former Rhine glacier and the glacier influence on landscape development within the past 450,000 years. An initial analysis of very fine sediments from a depth of around 50-140 metres already shows that there used to be a lake in the study area. In addition, isolated "dropstones" clearly indicate the cold period that prevailed at that time: small pieces of rock that lay within ice floes fell to the bottom of the lake as the ice thawed.

LIAG researchers are now making geophysical measurements in all boreholes with a wide variety of probes to determine the specific properties of the sediments. With seismic measurements between the boreholes, they will also record the in-situ conditions of the sediment deposits in detail. Geophysics is also crucial in order to transfer the punctual drilling results into three-dimensional space and thus make further conclusions. Initial results from preliminary investigations have already been converted into 3-D models. The sediments obtained from the core drilling are being examined by the project partners as to their age, pollen content, and the presence of microorganisms, among other things.

Of the two flush boreholes and the core borehole, each with a depth of around 160 metres, the latter turned out to be particularly challenging in terms of drilling technology, due to the sediment composition. "However, the core quality is very good and we managed to sample the cores intensively and carefully during the drilling process," explains LIAG project coordinator and geologist Dr David Colin Tanner, who helped supervise the drilling onsite. "We will match the results from the studies of the recovered sediments with those from the geophysics to get a comprehensive view of climate and landscape changes."

"With this project, we are conducting important basic research on the spatial and temporal dynamics of ice ages as well as on climate development in the past," say Professor Gerald Gabriel (LIAG) and Dr Frank Preusser (Albert Ludwig University of Freiburg), DOVE project leaders for the German Alpine region. "In addition, the data collected will provide valuable information on applied questions: For example, they can be used to determine the long-term security of groundwater resources. The data can also be used to define the potential of geothermal boreholes or basic geological properties and processes that can support future planning and forecasting."

Dr Ulrike Wielandt-Schuster, Referent for Geological Fundamentals at LGRB, is pleased with the successful conclusion. She sees the added value for the county: "Research drillings are very valuable for us, because the more well-founded and high-quality our database is, the better we can understand the structure of the subsurface."

As soon as the findings have been extended and consolidated by the further analyses, the project partners will offer an information evening to the citizens of the region and the wider public. There are also plans to exhibit the results in local museums.

Background to the funding

The research drillings are co-funded by the International Continental Scientific Drilling Program (ICDP), as an international organization for the promotion and support of geosciences in the field of scientific continental drilling, by the LGRB, by the German Research Foundation in the context of further investigation, and by the LIAG, which is responsible for the coordination of the research and the drillings at Winterstettenstadt. Overall, the aim of DOVE is to study sediments from up to 16 boreholes at as many sites around the Alps within the next few years. More than 20 national and international partner organizations with over 100 scientists are participating in the large-scale project.