How did the climate in the Alpine region change during the ice ages and shape glaciers, flora and fauna over the millennia?

Winterstettenstadt.  In April, the Leibniz Institute for Applied Geophysics (LIAG), in cooperation with the Albert Ludwig University of Freiburg and the State Office for Geology, Raw Materials and Mining in the Freiburg Regional Council (LGRB), will start three research boreholes within the community of Ingoldingen southeast of Winterstettenstadt, Germany. The boreholes, which are up to 160 meters deep, mark the start of the international project "DOVE - Drilling Overdeepened Alpine Valleys". The aim of this project is to reconstruct the spatial and temporal climate development during the ice ages in the entire Alpine region over the past 2.6 million years. 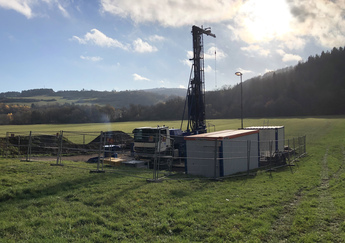 Research drillings should give information about the climate at that time (© H. Anger's Söhne) 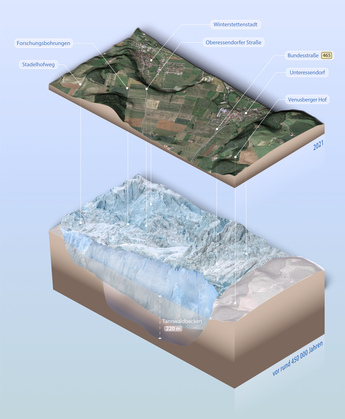 The region near Winterstettenstadt - today and about 450,000 years ago

Glaciers - The Ice Ages in the Alps (© Pixabay/LIAG)

The sediments extracted from the so-called Tannwald basin will provide information about the climatic changes in the region and their effects on the characteristics of the former Rhine glacier as well as on landscape development. To this end, two flushing boreholes and one core borehole, each with a depth of up to 160 meters, will be drilled over an area of 1500 square meters. The first flush drilling will start in mid-April, followed directly by the second flush drilling. A few weeks later, the core drilling will begin.

LIAG researchers take geophysical measurements in the boreholes with a wide variety of probes to determine the specific properties of the sediments. With seismic measurements between the boreholes, they record the conditions for the sediment deposits in detail. Initial results from preliminary investigations have already been converted into 3-D models. The project partners will analyze the sediments obtained from the core drilling for their age, pollen concentration and the presence of microorganisms, among other things. In some cases, the sediments are already being analyzed directly on site using a core scanner.

"With this project, we are conducting important basic research on the spatial and temporal dynamics of ice ages as well as on questions of climate development in the past," explains Professor Gerald Gabriel, geophysicist and project leader at LIAG. "The insights are important not at least for the understanding of possible developments in the future. In this context, geophysics is crucial to transfer the point drilling results into a three-dimensional space."

"Through international cooperation, we can pool our expertise in this large-scale project and interpret the results across disciplines and countries, as well as forecast developments," adds Professor Frank Preusser, sedimentary geologist and ice age researcher at the Albert Ludwig University of Freiburg. Dr. Ulrike Wielandt-Schuster, Referent for Geological Fundamentals at the LGRB, sees the added value for the state: "Research drillings are very valuable for us, because the more well-founded and high-quality our data base is, the better we can understand the structure of the subsurface."

In addition, the data collected provide valuable information on applied questions: For example, they can be used to answer questions about the long-term security of groundwater resources. The data can also be used to determine the potential of geothermal drillings or basic geological properties and processes, which can support future planning and forecasting.

The research drillings are funded by the International Continental Scientific Drilling Program (ICDP) as an international organization for the promotion and support of geosciences in the field of scientific continental drilling, by the LGRB, by the German Research Foundation in the context of further investigations, and by the LIAG, which is responsible for the coordination of the research and the drillings at Winterstettenstadt. Overall, the aim of DOVE is to study sediments from up to 16 boreholes at several sites around the Alps within the next few years. More than 20 national and international partner organizations with over 100 scientists are participating in the large-scale project.