Researchers at the Leibniz Institute for Applied Geophysics (LIAG) and the Leibniz University of Hannover (LUH) have developed an approach to detect the connection between disaggregation bands - centimetre-thick zones of deformed sediments - and the neotectonic activity of hidden faults in the subsurface. Even creep activity can be detected. Hidden faults have a high seismic hazard potential. The approach meets the great need for a robust geological indicator and should support its designation in existing hazard maps. The journal Communications Earth & Environment from the Nature portfolio has published the study. 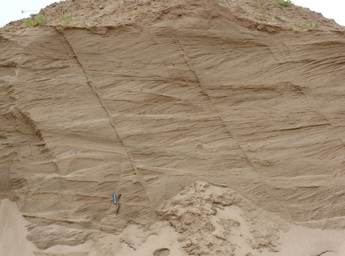 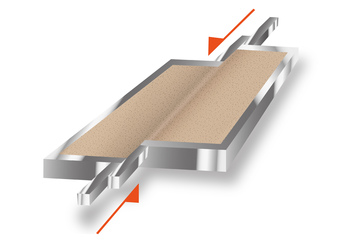 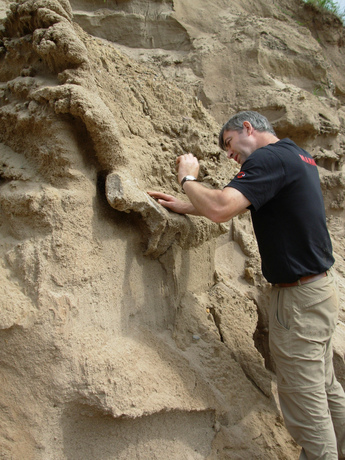 Hanover, Germany. In their study, the scientists investigated known concealed faults in Germany and Denmark and the disaggregation bands associated with these faults. Disaggregation bands occur in near-surface, sandy, unconsolidated sediments and are easily recognisable in natural outcrops and artificial pits. The researchers found that these disaggregation bands can be directly related to neotectonic activity on faults in the subsurface. This is an important step for neotectonic hazard analysis. Moreover, until now there have been no robust indicators to detect creep movements that took place, for example, a few thousand years ago. Creeping faults pose a particular challenge because, despite their current aseismic phase, they may well generate earthquakes again in the future.

"Hidden faults can have particularly large consequences because they are often unknown and earthquakes can occur unexpectedly," explains Dr Christian Brandes, geologist at LUH. "There are still many concealed faults whose position and activity could not be precisely determined until now - because detecting creeping faults in particular was only possible until now with the help of permanent observations at the surface."

Dr. David Colin Tanner, geologist at LIAG, adds: "Often, targeted observations are only made where earthquakes have already occurred. However, in northern Germany, for example, there are also stresses in the subsurface caused by the melting of the glaciers at the end of the last Ice Age, which have led to a still ongoing, but often underestimated activity on faults. Future analyses of the hazard potential of northern Germany would need to take the new findings into account."

Using a shear apparatus, the researchers simulated the formation of the disaggregation bands and were able to transfer these findings to the activity of concealed faults in the subsurface. In addition, the disaggregation bands were analysed on the smallest scale in the LIAG laboratory. With the help of computed tomography, geophysics has also provided important findings regarding the porosity distribution in the disaggregation bands as part of basic research. This is also important from other points of view: comparable bands in solid rock can have an influence on the production potential of geothermal energy or gas and oil deposits.

In future, the researchers will refine their new method in combination with other geological and geophysical methods for the holistic recording of fault activity. For example, in a project funded by the German Research Foundation on an active fault in New Zealand. For more than ten years, the cooperation partners have been trying to improve research procedures and methods, and thus create forecasts for the hazard potential.