Hanover/Jena. According to the current state of research, the eastern Periadriatic Fault System (PAF), on the border between the Eastern and Southern Alps, shows barely any historical and instrumental earthquakes - although it is one of the most important tectonic features of the Alps. In this new project, the Leibniz Institute for Applied Geophysics (LIAG) and the Friedrich Schiller University Jena are now using new dating methods, which for the first time will allow the most recent geological fault activities to be revealed.

Prof. Dr. Kamil Ustaszewski (University of Jena) and project manager Dr. Sumiko Tsukamoto (LIAG) collect rock samples with their research team at the PAF system. The samples are then analyzed in LIAG's world-leading laboratory for ESR and OSL methods. 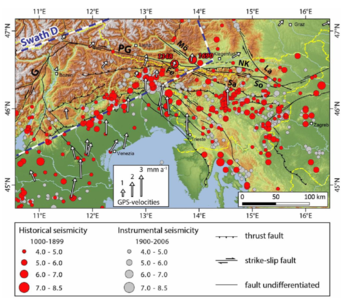 The Periadriatic Fault System (PS): Although the PS is a major tectonic lineament in the Alps, it shows barely any earthquakes (line PG), both in historical and instrumental data, compared to the eastern Southern Alps and the northern Dinaric Mountains. 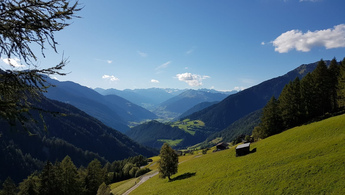 The periadriatic lineament – one of the most important tectonic features of the Alps – is a major factor determining the location of large alpine longitudinal valleys.

Were there paleo-earthquakes along the Eastern Periadriatic Fault System (PAF)? By combining the dating methods "Optically Stimulated Luminescence" (OSL) and "Electron Spin Resonance" (ESR), the research period of palaeoearthquakes can be extended to a large part of the Quaternary period, i.e. to the most recent geological period in the Earth's history (past 2.4 million years). For this period, little information on earthquakes in the eastern PAF is available yet.

In order to fill this gap, numerous gouge samples are being taken and dated from fault lines along the eastern PAF system between South Tyrol, East Tyrol, Carinthia and Slovenia. Building on the fact that the intensity of the OSL and ESR signals in quartz and feldspar can be partially reset by frictional heating during seismogenic faulting, the scientists intend to better constrain the timing of past seismic events by investigating natural fault gouges along the eastern PAF system. This new approach will help to unravel which of these faults have been seismically active throughout the Quaternary. In this way, an understanding of tectonic movements in the transition zone of the Eastern and Southern Alps and the Dinaric Alps throughout the Quaternary period will be gained and a synthesized conceptual model of the deformation processes will be developed.

"The analyses should show for the first time which fracture segments of the eastern PAF system have shown seismic deformation throughout the entire Quaternary period", explains Dr. Sumiko Tsukamoto, scientist at LIAG. “The overall goal is to characterize tectonic activity and to decipher whether it is concentrated along individual fault lines or in a broader zone.”

“To achieve this goal, we must be very accurate in the field during sampling as well as later in the laboratory when analyzing the samples“, says Prof. Dr. Kamil Ustaszewski, Friedrich Schiller University Jena. “Sampling requires precise structural-geological documentation of the spatial orientation and the composition of the rocks. These observations are the basis for a successful laboratory analysis and the interpretation of our results with regard to plate tectonic processes.“

The project is funded by the German Research Foundation (DFG), in the priority program "4D-MB - Mountain Formation Processes in 4 Dimensions". It is also part of Working Group (WG) C "Active tectonics at the transition between the Alps and Dinarides", which focuses on the only region of the Alps that is still tectonically active. The Priority Programme is a central part of the international AlpArray mission, which aims to map the structure of the European Alps from the surface to the mantle. Two other LIAG projects are also funded under the DFG priority programme: In one, four other main faults in the Alps will be dated, in the other, the focus is on creating a geological profile along the new Brenner base tunnel.

The Leibniz Institute for Applied Geophysics (LIAG), based in Hannover, is an independent, non-university research institution. Using methods of applied geophysics, future-oriented questions of social importance are investigated. The main focus of the research work is the exploration of the usable subsurface and the development of measuring and evaluation methods. The institute has over 50 years of experience in geophysical research. LIAG holds a world-leading laboratory in the field of optically stimulated luminescence and electron spin resonance dating for geochronology.